Trap Music, Trap Spaces, and Black Holes: From Harriet Jacobs to Fetty Wap and Beyond

On Friday, September 30th, at Wayne State University in Detroit, I gave the following presentation at the 2016 Union for Democratic Communications conference. It’s an excerpt from the third chapter of my dissertation, currently titled Original Gangsters: Genre, Crime, and Settler Democracy, a project in which I analyze the history and present of the gangster genre as a lens through which to better understand the dynamics of global governance, political economy, and social relations.

After chapters that examine case studies set in India and South Africa, my third chapter is centered on the U.S. In this particular excerpt, I situate Fetty Wap’s blockbuster hit, “Trap Queen,” about a domestic relationship framed by the trap house where the two partners live and work, within genealogies of “trap spaces” stemming from Harriet Jacobs’s “loophole of retreat” in Incidents in the Life of Slave Girl and the “burdened individuality” of post-emancipation black life as theorized by Saidiya Hartman. Further, I link this trapped, burdened individuality to the disciplinary pressures faced by university students of color, particularly black students, who are compelled to become “Breadwinner/Investor subjects of the nation-state,” as Sylvia Wynter explains, or, failing that, remain on the outside of this over-represented genre of humanity.

This is a work in progress, so I welcome any and all feedback.

(NB: I’ve posted images with the slides on top, my remarks at the bottom; you can click each image for a closer view.) 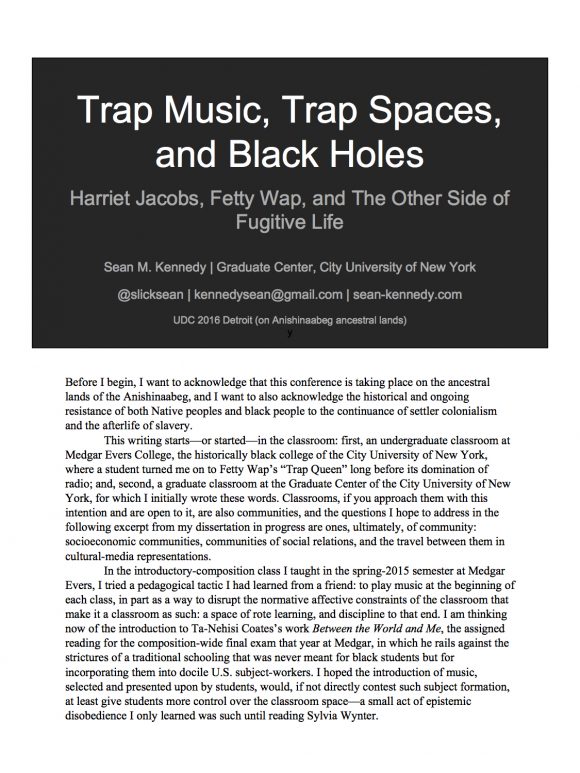 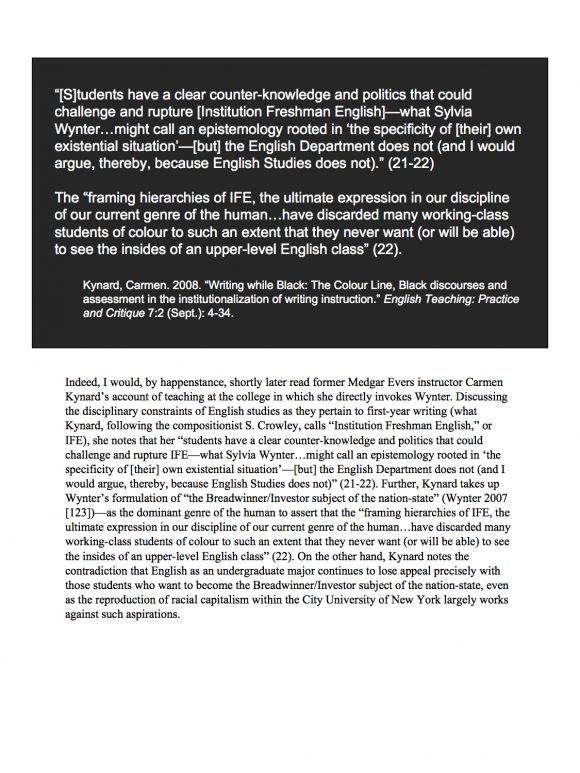 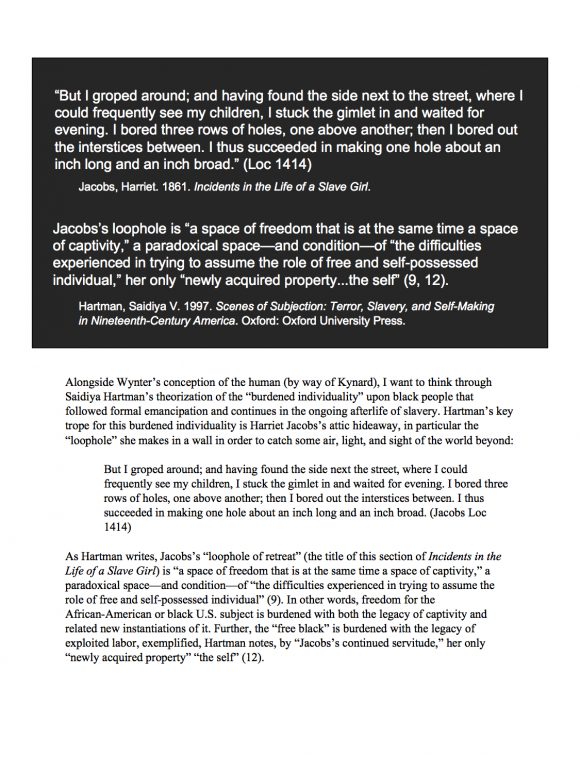 At this point in the presentation I played the first minute or so of the “Trap Queen” video below (beware that when you click play, an ad will start playing…).

Then I returned to my slides as follows. 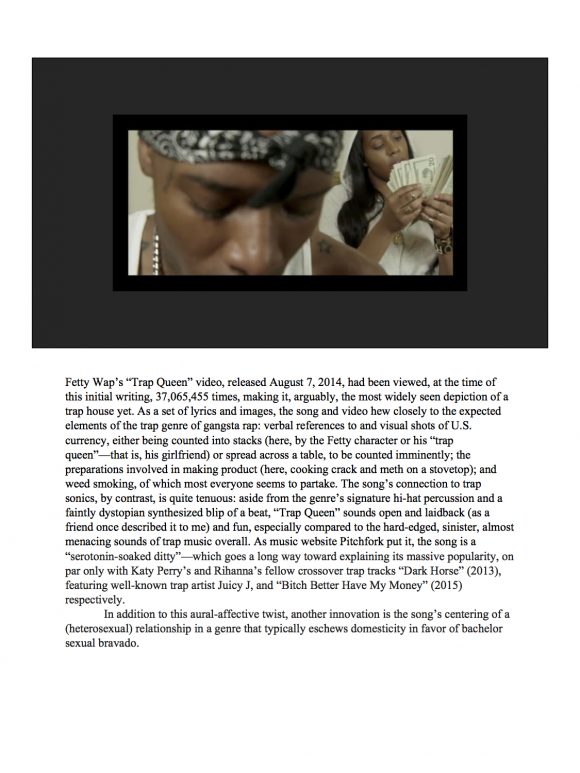 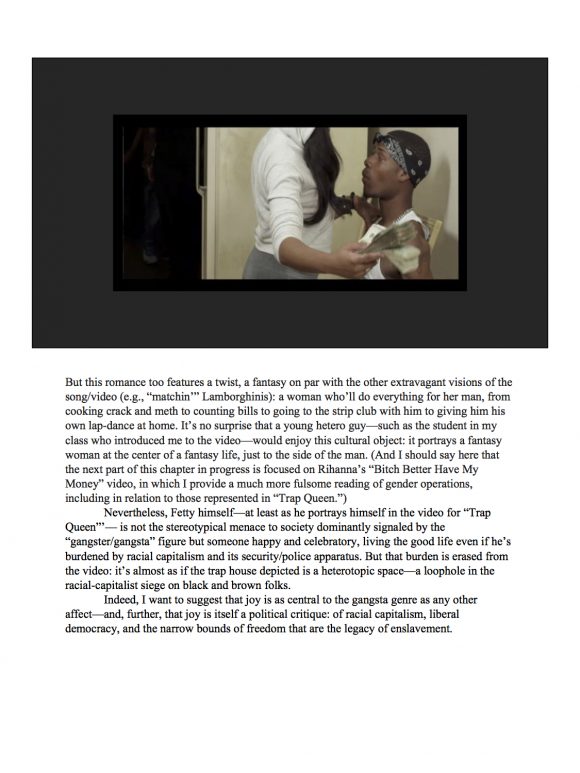 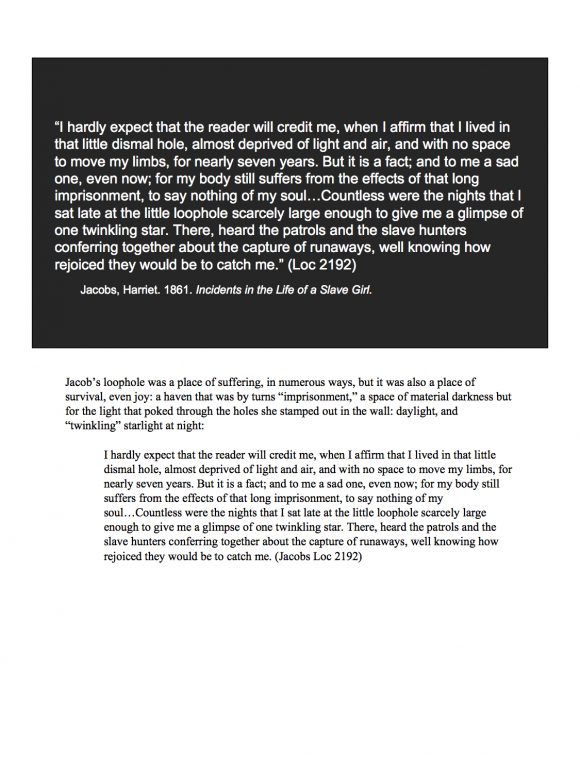 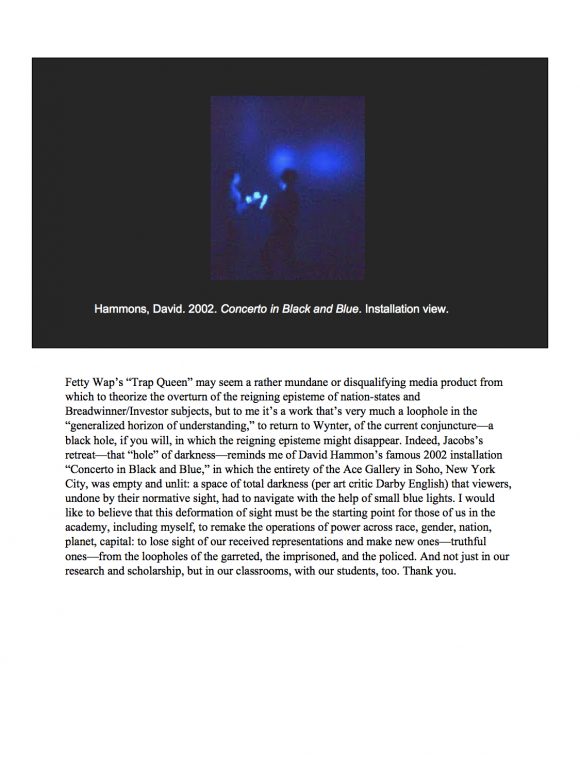 Beyoncé: From the Black Panthers to Israel? 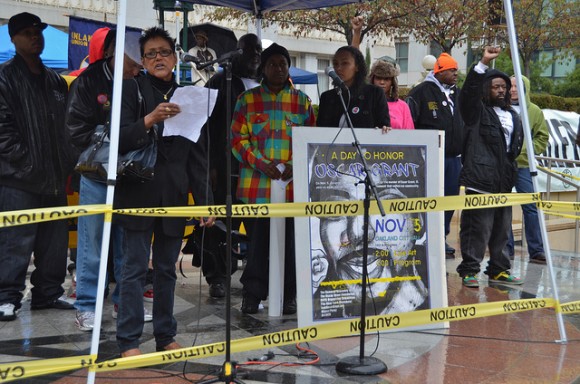 News circulating today about Beyoncé’s (latest) possible performance in Tel Aviv prompted me to look at what Elaine Brown, longtime Black Panthers member and the group’s chair for three years in the 1970s, and an inspiration for the look of Beyoncé’s dancers in her Super Bowl performance, might have had to say about Palestine. The Panthers, of course, were strong supporters of the Palestinians, particularly in the context of the group’s overall resistance to U.S. and Western imperialism, but I wanted to see if Brown had written anything about this solidarity. I turned to her autobiography A Taste of Power: A Black Woman’s Story (1992), cited on Twitter in response to Bey’s half-time show.

Although Brown doesn’t offer her own thoughts on Palestine and the fight of Palestinians against the Israeli state’s occupation and settlement of their land, she does recount the following (fascinating) details about Huey Newton’s revision of the Panthers’ political line on the situation:

He renounced the party’s Eldridge Cleaver-inspired position against the State of Israel. He sent a message to all Arab embassies and to that of Israel stating that the Black Panther Party now recognized both the State of Israel and the right of the Palestinian people to have a homeland.

The party’s position, as his message outlined, was that the Arab-Israeli dispute could be settled quickly if Saudi Arabia or Egypt, or some other territory controlled by the Palestinians’ rich brothers—who had been claiming since 1948 to be pressing to help them reclaim Palestine—simply gave a piece of territory inside their vast borders to the Palestinians and made them a new homeland. The wrong that had been done by the Stern Gang in collusion with the British gang and the U.S. gang in uprooting the Palestinians’ was a fait accompli. The resultant State of Israel had to be reckoned with, therefore. Life, like revolution, [Huey] said, looked forward, not backward.

His message contained the most daring conclusion. Ultimately, he exhorted, there was a revolutionary way to settle the conflict. He called upon Arabs and Israelis alike to recognize that the problems between them had to do with something larger than the territory of Israel or Palestine, larger than Judaism or Islam. It had to do with the theft and hoarding of the resources of the region—specifically the oil—by what he lambasted as a conspiracy of certain governments of the region with the U.S. He urged them to lay down their arms against each other, rise up united, and overthrow the reactionary Zionist government in Israel and the reactionary Arab sheikdoms and kingdoms and create peace in the land of plenty.

Huey found a certain private delight in taking that position, no matter how befuddled his troops became over it or that it tainted our nominal alliance with the PLO—and notwithstanding the damage it did to Eldridge. Several nights before he proclaimed the party’s new Middle East position, he told me about his father.

Huey’s father, Walter, was half white, or half Jewish actually: the product of a black woman and a Southern Jew named Simon. The question of whether or not Walter Newton’s mother was forcible raped, working in the house of Simon, was a technicality lost to history as far as Huey was concerned. What disturbed him was the damage that had been done to his father, whose self-hatred and hatred of whites was that of the son of a presumed rapist—despite his mother’s subsequent marriage to a black man named Newton, who gave him his name.

Somewhere in the outer regions of Huey’s thinking, he saw a connection between the bitterness of Walter Newton and the bitterness of Arabs and of Jews, and that of black people in general. It was, to him, a useless response to the sting of the past. They had all looked back so long, he declared, the present was obliterated and the future eclipsed. The relief of change was only for those who could create the future. There was, therefore, something poetically proper, healing, even, he thought, for the black son of the bastard son of a Jew to take that position. (254-255)

For more details on Newton’s highly nuanced position on Palestine, see Matthew Quest’s “The Black Panther Party and Palestine Solidarity” (2003), and for more info on the Black Panthers’ overall relationship to Palestine, see Alex Lubin’s new study Geographies of Liberation: The Making of an Afro-Arab Political Imaginary. And for a recent interview with former Panther Dhoruba Bin Wahad on these political links in light of current circumstances, including the collaboration between U.S. police (whose anti-black violence Beyoncé takes up in the video for “Formation,” the song she performed at the Super Bowl) and the Israeli security apparatus, check out this post by Davey D.