Opening a new front in the City University of New York’s repression of Palestinian-solidarity activism, John Jay College president Jeremy Travis issued a campus-wide email this afternoon asserting that Palestinian-solidarity activism “fuel[s]” anti-Semitism. His statement comes after the CUNY Graduate Center administration asked the Doctoral Students’ Council to pull the BDS resolution the body has been considering since mid-September, and after a top CUNY attorney denied that the university has sought to repress the efforts of Students for Justice in Palestine chapters, which a group of CUNY faculty had warned about in a collective letter to CUNY administration.

Scroll down for the complete statement, which was issued at 5:33 p.m. today and went to John Jay alumni as well. After stating that John Jay is “dedicated to our mission of ‘educating for justice'”—an obvious appropriation of “Students for Justice in Palestine”—Travis went on to say that he is “deeply troubled, both personally and professionally, by recent reports that Jewish students at John Jay College have felt intimidated and harassed on our campus.” He intensifies the rhetoric in the next paragraph, asserting that

These instances on our campus occurred at a time when other parts of our country, and countries in Europe, are witnessing a rise in anti-Semitism. Universities are often a focal point for organizing activities that have fueled these trends.

The rest of the statement employs the kind of platitudes automatically used to dress up such repression in the guise of “encourag[ing] free and open discussion,” the particular phrase Travis uses. But let’s be clear: this is the latest example that free and open discussion of Palestine, and the Israeli occupation and colonization of it, is not as free and open as CUNY administrators pretend that it is.

Furthermore, this statement is also an example of how opponents of Palestinian-solidarity activism turn claims against them into claims against the organizers. Just today a CUNY student held a news conference at the Brooklyn courthouse to detail what happened to her while recently protesting the Brooklyn Nets’ game with an Israeli team, when she was punched by an interloper, who was then allowed to escape with the help of the NYPD; the assailant later claimed he subsequently experienced a hate crime, which was circulated in sympathetic press outlets. And at the beginning of this semester, after an SJP die-in at Brooklyn College, an SJP member was spat on by a fellow student.

John Jay College’s SJP recently held its own die-in, and we see the angry response, this time from the college’s president.

Click the image below for a closer view of Travis’s statement. 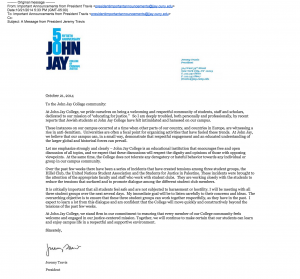